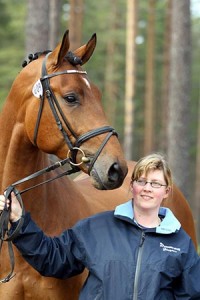 I am a small-scale horse breeder, which means that the most important factor is a healthy broodmare of good quality and good pedigree. My first mare, Patricia SWE, was bought from Sweden and her dam Pärlemo (by Flamingo SWE, OS -bronce medalist in Los Angeles 1984) was an elite mare, awarded as the mare of the year. Patricia’s daughter, Apres Pearl (by Midt-West Ibi-Light), has as well the elite mare status . Apres Pearl’s daughter Roulette Russe P (by BH Romanov, 1st price mare ) will hopefully follow her dam’s footsteps as a broodmare. Additionally, 2012 a I purchased a KWPN elite mare from Germany, Nightflyer T Old (Rubinstein-Donnerhall), who is half-sister to the stallion Sorento Old (Sandro Hit-Rubinstein) .NIghtflyer T herself has left an AES approved stallion, Versace. 2015  I did purchase Nightflyers daughter from Netherlands, Cape Canaveral VDM (by Krack C)  For me it is very important as well the mares come from bloodlines that has procudec horses competing on the highest level , Grand Prix.

At the moment, my best homebred horse is the approvedstallion Duendecillo P (sire BH Don Romantic), who is approved with both Hannover and FWB and is successfully competing at the international GP-level on dressage. 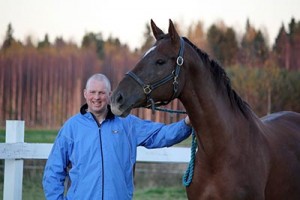 The only way to succeed it in breeding is to invest in good mares and at least for my part it has been a fruitful endeavor. We have only 1-4 foals each year, which I think is a suitable amount. Despite the small number of foals, the best 3-year-old dressage horse in the Abilites Forward event 2014 and the 2nd best 4-year-old dressage horse in the Quality evaluation event 2014 came from my dam line.

In addition to horse breeding I am a practicing veterinarian and owner of a stud where we’ve had our own breeding stallions and leasing stallions owned by Blue Hors and Stutteri Ask.